The Bible says to obey leaders and pray for them. Does that include praying for toxic rulers and malevolent governments? Should we pray for their removal?

God keeps his promise. The psalmist reminds us of how God rebuked kings and warned them against harming his people. He did it for the sake of his promise (Psalm 105:8,14-15). And yet……

The same song mentions Joseph, sent to Egypt as a slave (17). When a ruler there shackled and imprisoned Joseph unjustly, God blessed him in prison, but there’s no record of the Lord rebuking the ruler.

Then the song features Moses (26). He too was sent to Egypt where a ruler was oppressing the children of Israel. He wasn’t sent into shackles, but sent there for signs and wonders. This time God does rebuke the ruler. He disrupts Pharaoh’s rule, removes his heir and demolishes his army.

The two scenes in the song show God working differently with the rulers. His aim – whether through a Moses-strategy, a Joseph-plan or some other approach – is to deal with each ruler in a way that will best serve his covenant promise to his people (8-11). The promise is connected to his eternal glory, so protecting and fulfilling it is his priority.

He might muzzle the power of one toxic ruler (or remove the ruler, Dan 2:21), but allow another to continue a reign of injustice. That doesn’t mean he punishes one but pardons the other. A final reckoning is certain for all who refuse his salvation gift. But in history the Lord deals with rulers in ways and with timing that best serve his promise and related plans.

Praying into arenas of unrest

Praying for toxic rulers can change them and re-shape the way they rule. But is it ever right to pray for their removal? Before going there, it’s good to tighten our hold on these two truths as pray-ers:

Celebrating those truths gives rest, and restfulness empowers us to pray into arenas of unrest. 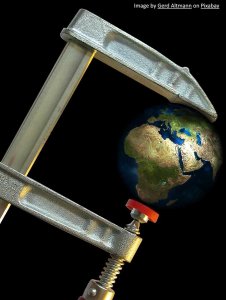 Many are praying for Ukraine, asking the Lord to stop the war, bring violence and bloodshed to an end and halt the destruction. When there is no immediate answer, it doesn’t mean that the Lord isn’t hearing. He blends our asking and his answers into the huge picture of him at work.

The Lord uses governments, even oppressive ones, to serve his plans. But, with Dan 2:21 in mind, are there times in praying for toxic rulers that we should ask for their removal from office?

Abuse of power in the world is common, and it spawns violence, oppression and injustice. But praying for the removal of a ruler (or government) can’t be based purely on the suffering, loss or injustices caused by the toxic rule. In view of Rom 13:1, asking for a ruler’s removal isn’t an easy go-to prayer to resolve political chaos or social injustice. But, are there green-light times for using our prayer licence to ask for the removal of a ruler?

The ruin and loss of lives in the current Russia-Ukraine conflict is tragic. The question we ask is: In the tragedy, is there something in particular that warrants a ruler-removal prayer?

For instance, the rising generation has (by God’s promise) an exciting future through Christ! They have the promise of his Spirit, and a legacy from the earlier generations that have hungered after God. This includes Ukraine’s young people, children and those yet to be born. They are given life to know the Lord and make him known beyond the level of believing parent generations.

But the systematic violence in Ukraine is breeding fear, wrenching children from parental nurture and ending young lives prematurely. The Lord’s promise for the rising generation there is being attacked by Darkness operating through rulers. When government shows no remorse or sign of relenting from life-destroying campaign, it could be God’s green-light time for us to ask for removal from the office that empowers it.

This doesn’t cancel prayer for repentance of a ruler or government, or prayer for an end to the war. But it champions God’s glory by asking that whatever attacks his magnificent promise be changed or else moved aside.

A prayer conversation piece about the conflict

Make the Ukraine-Russia conflict a conversation piece with the Lord. Or, focus on another arena of conflict that you are currently identifying with.