Joel’s message had good news and bad news. The bad: a mega-judgment is on the way. The good: it can be avoided.

The good news route involved repentance in a massive prayer gathering marked by humility and re-consecration. It was for all. Children and nursing moms standing with the nation’s elders. Bridal couples delaying their weddings to be there (Joel 2:13-17).

The action center was the court of the priests. There, between the porch and the altar, repentant priests were to pray with broken hearts. Not just any prayer. God gives them the prayer he wants to hear.

It’s a prayer for mercy, but it ends with a question: Why should they say among the peoples, ‘Where is their God?’ God put the question into the prayer script for a reason. 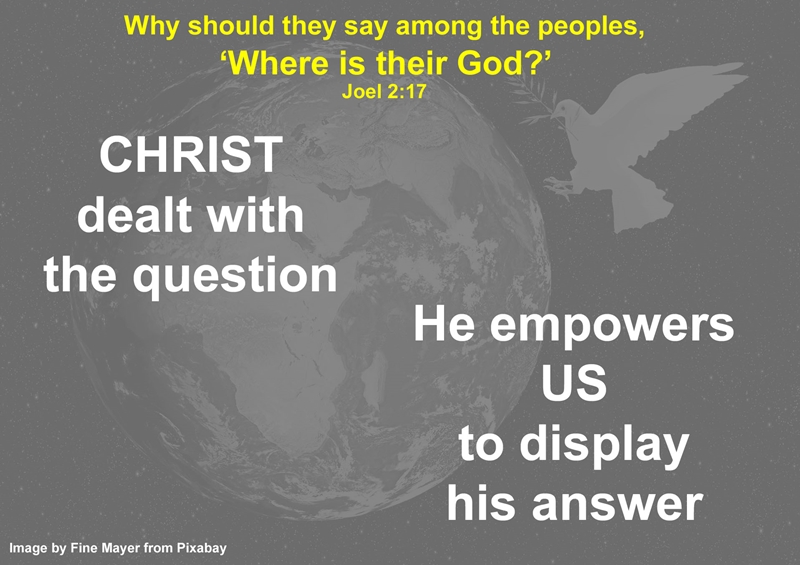 Unless Judah repented, judgment would happen. But there would be fall-out: the watching nations that see the withdrawal of God’s blessing will ridicule them. And the song of the mockers would be: Where is their God? It was a question no nation should have reason to ask about God’s covenant people.

The Glory of God was the big issue, so, Judah’s repentance was vital. It would be followed by a restoration, and God would show the watching nations that I am in Israel (2:18-27). The Lord would remove the reason for the question, Where is their God? Clearly, he would be among his people.

Joel sees something bigger and better coming. A prophetic leap takes him centuries ahead, to Jerusalem on the day of Pentecost, and he announces the promise of the Spirit’s outpouring (2:28-32).

The Spirit of Promise arrives in power. The afterward normal is: God with us….constantly! He has removed, once and for all, grounds for the question: Where is their God? Pentecost was his loud answer: I AM HERE! Here with my people! Here to stay!

But for the question to NOT be asked, the answer must be clearly seen. Pentecost was more than a supernatural launch event of the new covenant church and its mission. The Spirit’s arrival means that, for us living in the afterward, daily life is beyond ordinary and happens in God’s company. The timid are empowered, the weak made strong and the empty filled up. His presence is our distinguishing mark, and as long as it’s clearly visible none should have a reason to ask, Where is their God?

Now it’s our day. We want to live as an empowered people of God’s presence. So we stretch our prayer appetite, hungry for him, filled and changed by his Spirit. We will not give the watching world reason to ask the question the Lord dealt with. Rather, we live as a clear display of the amazing answer: HE IS HERE!