Asking God for a NEW THING

Habakkuk is a herald of coming disaster. The Babylonian invasion of Judah would bring death, desolation and captivity. Jerusalem would be ravaged and its temple ruined.

He is in lament mode and has reason to be. But the prophet’s complaints and questions (chap 1-2) haven’t eroded his trust in the Lord’s goodness. So, he steps into the intercessory gap that God always creates between himself and people in need.

As he prays, Habakkuk’s mind scans Israel’s past. He sees God’s right hand punctuating the nation’s history repeatedly with powerful deliverances. Again and again, he protects them from enemies, rescues them from their own sinfulness and restores their glory. Now the prophet pleads with God to do it again: Lord, I have heard of your fame; I stand in awe of your deeds, Lord. Repeat them in our day, in our time make them known; in wrath remember mercy. (Hab 3:2).

His prayer is good, and he knows that the awesome things asked for WILL happen. But not yet. The answer will delay for seventy years.

Habakkuk isn’t praying in the dark. He knows of God’s plan to evict sinful Judah from the land. He knows about the NEW THING God had promised: a return to the land, rebuilding of the nation, restoration of their glory and preparation of the stage for Messiah’s arrival. This is what Habakkuk is asking for; he is investing prayer into that great, promised breakthrough! His is a prelude to Daniel’s prayer (O Lord, hear and act). He is living in the song of Zephaniah (he will rejoice over you with singing), joining the cry of Jeremiah (Restore us to yourself, O Lord) and echoing the desire of God himself for the promised NEW THING to happen.

He knows his asking is important to the outworking of God’s promise (it’s a Purpose-and-prayer connection designed by God). He knows there’s not going to be an immediate answer. But something is already happening. The prayer engagement is not changing the circumstances (yet), but it is changing the pray-er.

This post follows my earlier one; if you missed it, go to When change starts in the one asking. I wrote that “the change asked for often begins with a change in the one doing the asking.” 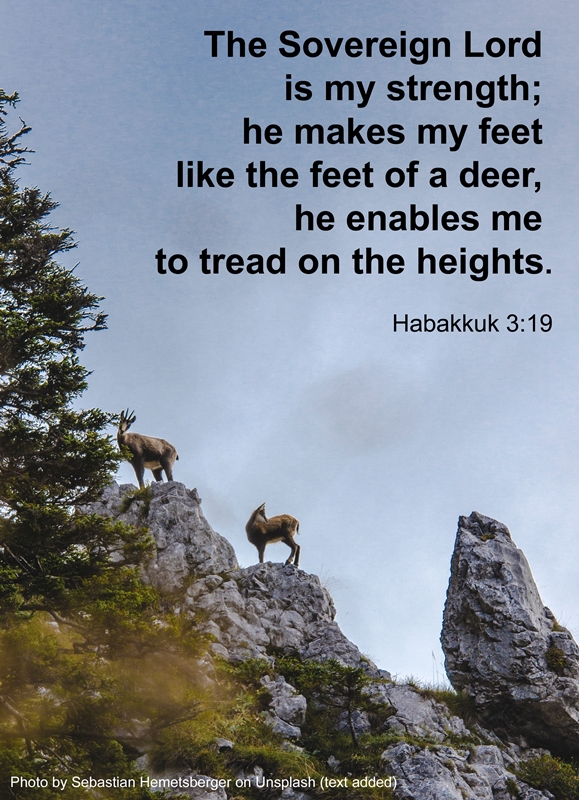 While Habakkuk is praying into the nation’s crisis, the Lord is opening up a NEW SPACE for him. The prophet knows that it’s happening: The Sovereign Lord is my strength; he makes my feet like the feet of a deer, he enables me to tread on the heights (Hab 3:19). He uses the image of a deer’s sure-footed ability to clamber up a steep mountainside as a metaphor for the way God is enabling him (in the rough terrain of his current circumstances) to move higher. Habakkuk’s prayer, asking for God to do a NEW THING, becomes a platform for stepping into a NEW SPACE in his walk with the Lord.

The NEW SPACE is always better than the current one. For the prophet, it was a bigger experience of enjoying the Lord in difficult circumstances (Hab 3:17-18). For us, the space the Lord is opening in our current NEW THING asking might be quite different. But, as with Habakkuk, our asking will change us.

We love it when the Lord assures us he will do a NEW THING. Our asking point might be for our nation or community, for a personal breakthrough, or it might reach further to an unreached people or international crisis. The NEW THING answer might be delayed, but not the changes. By involving us in his plans as pray-ers, God opens a NEW SPACE for us to tread on heights which we might otherwise have missed.