Can we ask WHATEVER we wish? 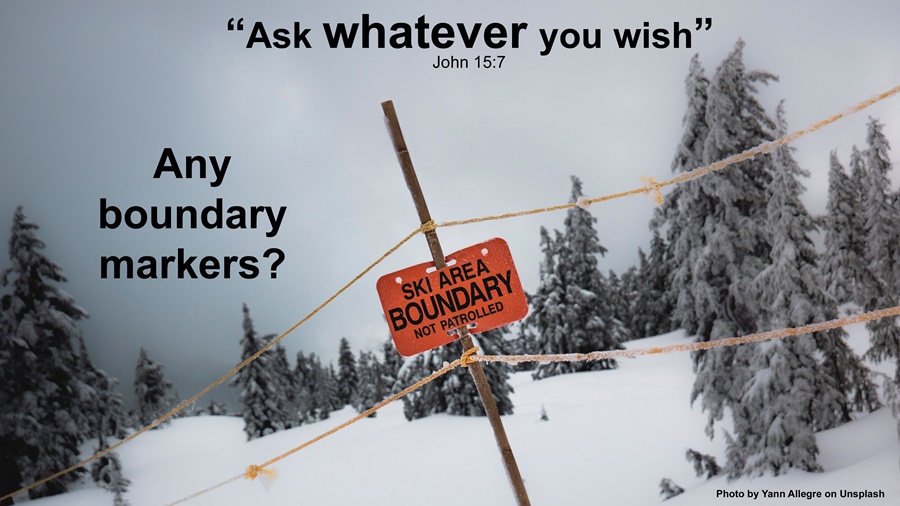 In the post, Venture beyond the shoreline I wrote about shaping our asking to match the extraordinary answers needed; asking “for the big and impossible when those are the kinds of answers needed to make a difference.” Someone asked: How big is our asking license? Are there limits? And how can we keep from straying across the boundary into the wasteland of presumptive asking?

Ask whatever you wish and it will be done for you.

Wow! Was Jesus really giving a wide open asking license? It seems that way, but only if we lift his promise out of its frame. In that John 15 passage, Jesus added some boundary markers in the not-so-fine print. I’ll mention the four markers, but give most space to the first one.

Marker 1: Oneness with Christ. The vine and branches in John 15 is a metaphor of Christ-and-us oneness. Asking springs out of desire (wish), and desire is shaped in union with Christ. When Jesus gave the ask whatever you wish….. invitation he set it in a frame of oneness with himself: If you remain in me (v7).

The pray-er doesn’t create a request, then ask Jesus to add his name to it. Our asking is an echo of his desire. Christ sees every need before it enters our life-arena and knows the best answer for it. His desire includes the good outcome and the asking that leads to it. Our prayer license gives us the right to talk to him about the need, learn his desire and then shape our asking to agree with him (or, as John puts it, ask according to his will). Because oneness with Christ is so important in prayer, his Spirit has come to teach us his desires and give a witness of peace when our asking agrees with him.

Our praying is an ‘incense of agreement’, an imperfect (yet powerful) voicing of oneness with Christ’s intercession. As long as our asking has the fragrance of union with Christ and his desires, it pleases the Father.

Asking ‘in faith’ means that we belief God CAN do it. And, while declaring that he WILL is not always necessary (‘tho at times he gives a green light for that), a witness that he WANTS to is. Restful confidence and perseverance is fed by the awareness that our asking agrees with the Lord.

Marker 2: The Filter of Truth. The redeemed heart is a home for the Lord’s words (v7 and my words remain in you). When Word-truth is given lodging space in the heart, it has a filtering influence on our asking, separating the pure from the impure and the right from the reckless.

Marker 3: The Father’s glory. All prayer – the asking process and the outcome – has this great aim: This is to my Father’s glory (v8). A critical test of rightness about an asking point is not whether we feel it will meet a need, but whether or not the outcome will draw attention to what the Father is like, and whether the prayer journey towards it is deepening our admiration of him.

Marker 4: The Love Priority. Now remain in my love (9-17). Love steers the heart into prayer that serves. It rejoices in asking that makes more of the Lord and less of ourselves. Love is a powerful manager of prayer license, including what we choose NOT to ask for. It guards our asking from self-preoccupation, and nurtures sensitivity to the Father’s pleasure in lasting fruit (see Christ’s whatever you ask again in v16-17).

Boundary markers aren’t meant to diminish our asking, but to increase our accuracy. Usually any one of the above markers can alert us when our asking is ‘off’. But a good exercise for growing our sensitivity is to check an asking point against each of the four. Read the John 15 passage, then use the markers to test your asking point (current or new):