“Pray continually”- given to train us, or tease us?

Pray continually – given to train us, or tease us? Is 1Thes 5:17 a great idea, but not doable; an unreachable standard?

This short phrase is sidelined by some, but is a life passion for others. Some handle it by pasting regularly over the continually. Many simply drop it into their ‘impossible’ folder, while others have redrawn their spiritual boundaries to make space for it.

This verse has been the source of ancient streams, some still flowing. For instance:

The Jesus Prayer   In the early centuries after Christ, praying scripture was common among monks in the deserts of Egypt and Syria, with emphasis on the name of Jesus. They blended short prayer repetitions into life’s activities so as to pray continually. Later the discipline appeared in writings, and the ‘Jesus Prayer’ took on the form still used by many today: Lord Jesus Christ, Son of God, have mercy on me, a sinner (based on Lk 18:13).

Some use a (knotted) prayer rope, prayer beads or a digital counter to tally their constant or regular repetitions of the Jesus Prayer.

The Way of a Pilgrim is a 19th-century Russian writing by an unknown pursuer of constant prayer. One Sunday, after hearing the text Pray continually, he went in search of the how-to. He met someone who explained it as the practice of uninterrupted calling on Jesus’ name. The pilgrim began by reciting the prayer formula 3,000 times a day, later increasing to 12,000. The Way of a Pilgrim is a record of his journey, and the book’s popularity has helped make the Jesus Prayer one of the most widely used in the world.

Breath Prayer  These are short prayer bursts (called ‘Aspirations’ by many, from Latin ‘to breathe’). True, the Jesus Prayer fits in the ‘breath prayer’ genre, but is distinct, so I’ve kept it separate. Initially fifteenth century Franciscan monks repeated these breath prayers as a string of phrases, each focused on Jesus’ name. They were mainly petitions, but there was room for variation, unlike the set formula of the Jesus Prayer.

A breath prayer can be the repetition of a word or, more commonly a sentence. As with the Jesus Prayer, rhythm is important, so many bond their prayer to their breathing – repeating the first phrase of their prayer as they inhale and the second as they exhale. For instance, praying the words of Psalm 121:2, (in) My help comes from the Lord (out) the maker of heaven and earth.

In both the Jesus Prayer and breath prayers, the aim is constant repetition. The life of 19th-century Irish Jesuit, William Doyle illustrates how much emphasis some put on constant repetition in their pray continually quest. Doyle began praying a few thousand breath prayers a day. In less than three years his daily number was 10,000. Two years later he aimed for 20,000, and then 60,000. As a soldier in the World War I trenches he set his aim at 100,000 daily prayers. (Wow! We might wonder how he fit that many ‘breaths’ into a day’s 86,400 seconds!). 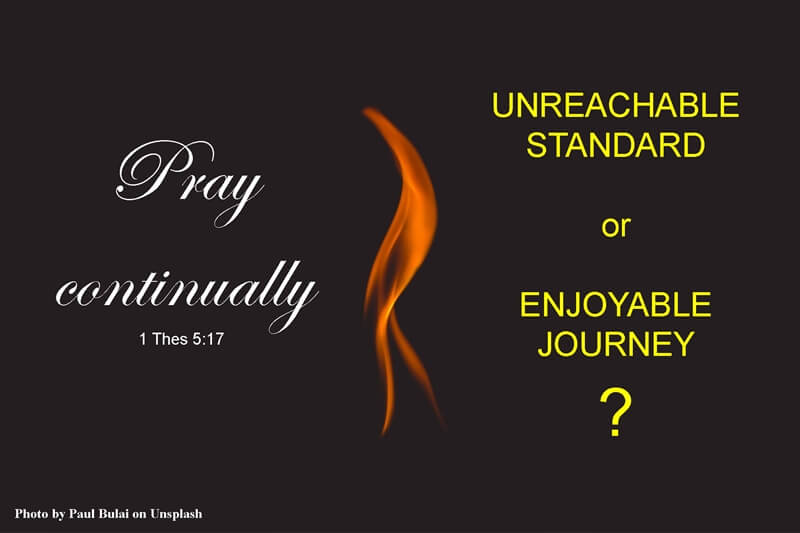 So, Pray continually – given to train us, or tease us? The Spirit didn’t give it as a standard to be attained, but as a journey to be enjoyed. It’s a call to prayer intimacy, to shape life around that core.

To grow in pray continually, do we have to follow the Jesus Prayer formula or Breath Prayer formats? No. I personally prefer ‘conversation pieces’. But many find constant, or regular repetition of short prayers helpful. However, there are benefits and cautions:

Benefits: They can help to….

The desire to pray continually connects us to a great movement in history. Many excelled in the journey; others have left a tale of puzzling motives or credos. But the stream still flows. And now it’s our day to be the imperfect pray-ers who desire to grow in pray continually.