Our prayer licence in Christ permits declaring in prayer. It can be spontaneous, but it’s the prepared ones that shape and strengthen us most in using declarations. This Pray in the Rain post should be read in tandem with the earlier one explaining the ‘runway’ for better spiritual vantage, viz. contemplation. 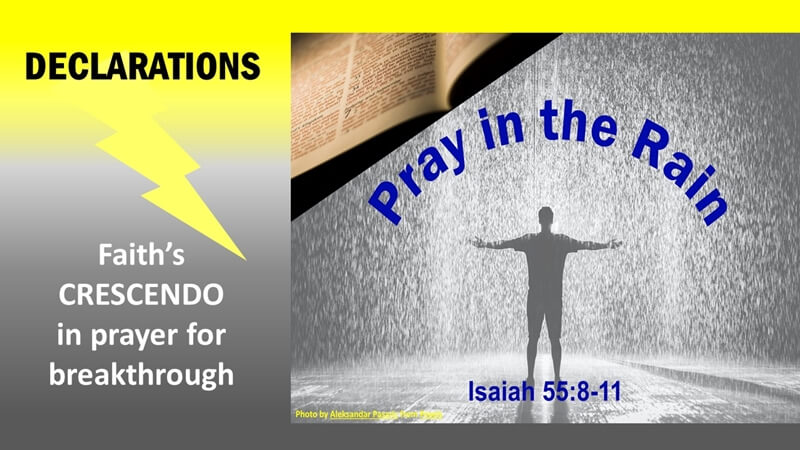 Pray in the Rain – Declaring

For some people, declarations don’t feature in prayer life at all. Others pray them liberally, often using declare, decree and command as synonyms. We need to know why we’re moving beyond asking into declaring, and what we mean by it.

There’s a holy aggression in declarative prayer. It’s both worship and warfare, with a prophetic cutting edge. A prayer declaration is an authoritative announcement that lines up with God’s desire to advance his Kingdom and break through stubborn resistance.

Thankfully, God hasn’t tied our prayer authority to semantics. We can pray declaratively without actually saying I declare. It’s not the vocab that gives our prayer declaration its authority, but the strength of our heart’s agreement with the desires of the One in whose name we pray.

Back to the runway

Let’s pick up on the admiration that overflows from contemplating the Lord’s greatness in Psalm 135:5, 6. We’ll focus our admiration responses on: praise, celebration and thanks.

I know that the Lord is great, that our Lord is greater than all gods. The Lord does whatever pleases him, in the heavens and on the earth, in the seas and all their depths.

PRAISE the Lord: He is greater than all!

In what ways do you see the Lord being greater than all gods? Exalt him, that he is unique, incomparable, the supreme God who CAN (unlike the gods who CANNOT).

CELEBRATE the Lord: His greatness triumphs! Then, add THANKS

I know that the Lord is great…The Lord does whatever pleases him, in the heavens and on the earth, in the seas and all their depths.

Celebrate (share in the Lord’s joy), then add thanks that:

It might seem like we’re moving away from our aim: prayer declaration for breakthrough. But the contemplation (and resulting admiration) isn’t a diversion or gap-filler. It’s crucial to strengthening our agreement with the Lord for the spirit of faith’s crescendo: DECLARATION!

Contemplating the Lord does more than strengthen faith to reach for things that seem ‘impossible’. Seeing him more clearly feeds our passion to WANT the breakthrough that will draw attention to his Glory!

Prayer for a BREAKTHROUGH

Focus on a situation where there has been stubborn resistance to change or to Kingdom advance, and where a demonstration of God’s power is needed for breakthrough.