A cry for help in a crisis. A request for an iPhone upgrade. Asking guidance for the future. Asking grace to cope with the present moment. A mom praying for her sick infant. A team asking for mission breakthrough. A group praying over broken marriages. Just a few samples from the constant torrent of prayer asking God to do things.

The range of what people ask for in prayer, and why, is vast. The size of the Lord – his ability to listen and deal with the immense volume of varied asking – is fathomless. He hears, gives wise, loving attention to each pray-er, and works our prayers into the unfolding of his plans. Amazing God! No one is like you, O Lord; you are great…..! (Jer 10:6)

The Lord invites us to ask. Apart from the benefit to us, both the asking and the answers draw attention to his Glory. But, while asking is important, it doesn’t have to be wordy. After all, the Lord knows each need before it arrives in our living space. So, why not spend less time on ASKING and more time on ADVOCATING*?

To advocate in prayer means: giving the Lord truth-loaded reasons for answering the asking point. It’s frequently done in Bible prayers to ‘build a case’ with the Lord. Not that God needs convincing. But by working through reasons for God to answer, we grow our agreement with him. And as agreement deepens, faith strengthens. 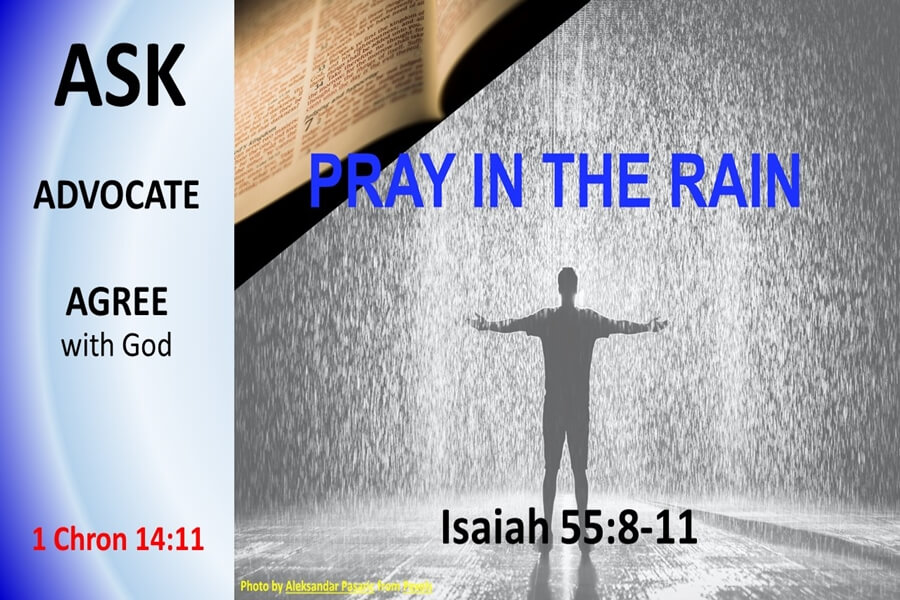 Pray in the Rain

Again, we’ll use a verse from the Pray Scripture Bank as an example: Asa’s prayer in 2 Chron 14:11 He gives one really short asking point, followed by reasons for God to answer (he advocates).

King Asa had inherited a kingdom at peace. He removed objects of false worship from the land, called for obedience to God and fortified the towns and cities. But the peace ended abruptly with a foreign military invasion. Opinions differ about who the invaders were. What we do know is that the invading army massively outnumbered Judah’s, and the fortified cities would not survive the attack. So Asa prayed.

The nation is in crisis, their future at stake. The armies are in battle positions. The need of the moment isn’t for a long prayer, but for an impactful one.

I love the way Asa, in the heat of the crisis, puts admiration of the Lord first. He exalts him for being a Helper like no other: Lord, there is no one like you to help the powerless

Lamenting over the situation had probably already been done. So, now he asks, just one action word placed alongside the Name: Help, Yahweh. Sure, he could have included some suggestions on how God might help: give them supernatural battle skill, dispatch a warrior angel or rain fire from heaven. But, no, he sticks to one short, direct request for God to act, and then gives the remainder of his prayer space to advocating the answer they need.

Here are the truth-reasons he gives God for answering his call for help:

In other words: Lord, it’s not your nature to ignore those who take refuge in you in a crisis.

In other words: Lord, this battle is impossible to win by ourselves. We are here under the banner of your name. So, the outcome of this crisis will reflect on the fame of your name among the nations.

In other words: Lord, you started this relationship. You drew us to yourself, made us your own, and you always take care of your covenant people.

In other words: Lord, you are greater than all. No enemy, no matter how big, can match your power.

For an explanation of the Pray in the Rain series, read Agreeing with God.

*To advocate is to support, recommend or champion a particular cause.