The previous Pray in the Rain post was about ASKING for God’s help. In the anchor scripture (2 Chron 14:11), Asa advocated the answer needed by giving God reasons, viz. trust in him, his honour, their covenant relationship and his unmatched power. God’s answer was immediate.

In ‘building a case’ with God in prayer, there are different ways to advocate the answer. Not trying to convince the Lord to see it as we do, but to champion an answer based on what the Lord has said or shown us about his nature, ways and works. We advocate answers that agree with him.

We’ll take a bit more time on this. Rather than jump to a new prayer type and fresh scripture from the Pray Scripture Bank, we’ll stick with Asa’s prayer asking for help, but open a new level of ‘reasons for answering’. That is, appealing for the answer by pointing out what might happen without it.

What if God doesn’t answer? It’s a good question to ask – not to feed doubt, but to strengthen our reasons for the needed answer. 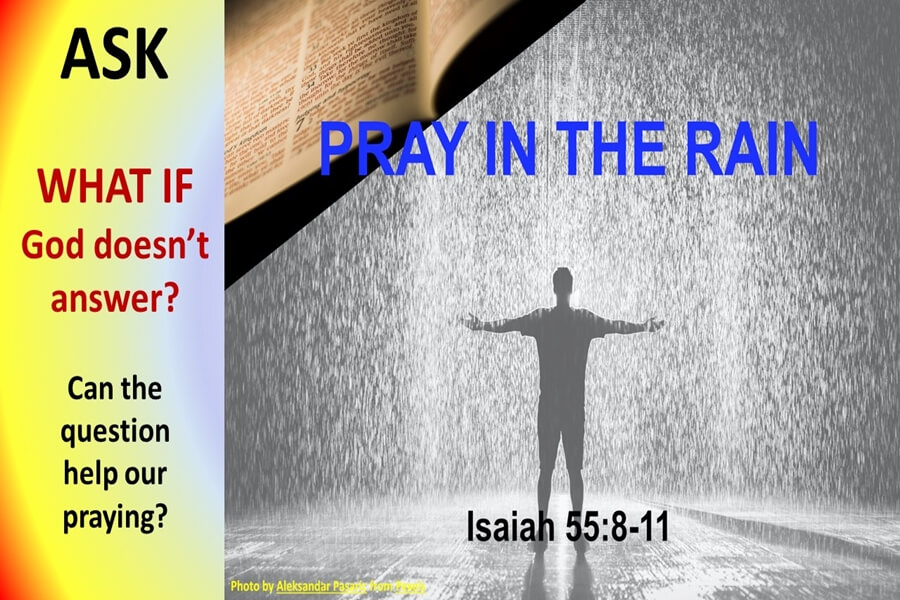 Pray in the Rain – The ‘What if’ question

The ‘If God doesn’t answer’ scenario can be broken into two parts:

I’ll illustrate from Jer. 38. It’s not a prayer example; it’s the record of one man interceding for another before a king. But the approach can be applied to prayer.

The prophet, Jeremiah is falsely accused, imprisoned, released, accused again and lowered into a muddy cistern. A Cushite palace official, Ebed-Melek, hears the news and approaches Judah’s king on behalf of Jeremiah.

His plea is for the king to rescue Jeremiah from certain death. The Cushite gives the king reasons to act by touching on the ‘If no answer’ scenario (Jer. 38:9).

He points out that the men who put Jeremiah in the cistern acted wickedly. As long as the situation remains unchanged, wickedness gains. Undoing the situation will be a win over wickedness!

His intercession was successful; Jeremiah was rescued.

If interested, check out an example of David using this approach in Psalm 13. If God doesn’t answer his plea, it could cost him his life (the loss), while his enemies boast and celebrate his demise (the gain).

Back to that Pray in the Rain exercise in the previous post where you identified a crisis or need for prayer. You advocated the needed answer using the good reasons given by Asa in the above scripture, plus a couple of your own.

Please don’t rush through those reasons. When you are ready, move on to your ‘If God doesn’t answer’ appeal. Ask for the Spirit’s help to see a clearer (albeit imperfect) picture of the likely consequences, unless the Lord steps in. Pray over the questions:  If God doesn’t answer…

Thinking and praying, even lamenting, through the consequences (likely or certain) of the crisis/need will usually deepen our sense of urgency in asking for the Lord to act. But most importantly, it adds reasons for the answer we are advocating. Again, as agreement with the Lord grows, expectation strengthens.