Siam became Thailand in 1939, Land of the Free, as a permanent acclaim for not being colonized by Europe. But true freedom is about more than what we are not. It’s the liberty to become like Christ (2Cor 3:17-18). If that is to be the transformation carried in the nation’s name, then we definitely need a prayer movement in Land of the Free.

Over 90% of Thailand’s 70 million people are Buddhist. After two centuries of mission activity, ninety-five percent of the nation’s villages are still without a gospel witness. Praise the Lord for every changed life, but the great breakthrough won’t come because we try harder, adopt new methods, add workers or enlarge budgets. Spiritual darkness is overcome by superior spiritual authority (Mt 12:29). The main arena of that confrontation is prayer.

Although small, the size and maturity of Thailand’s church today gives it a mantle of prayer authority larger than at any other time in its history. It’s great to see an increase of prayer gatherings, training and ministries, but the nation needs more than these encouraging pockets of prayer activity. Lord, give Land of the Free a prayer movement. 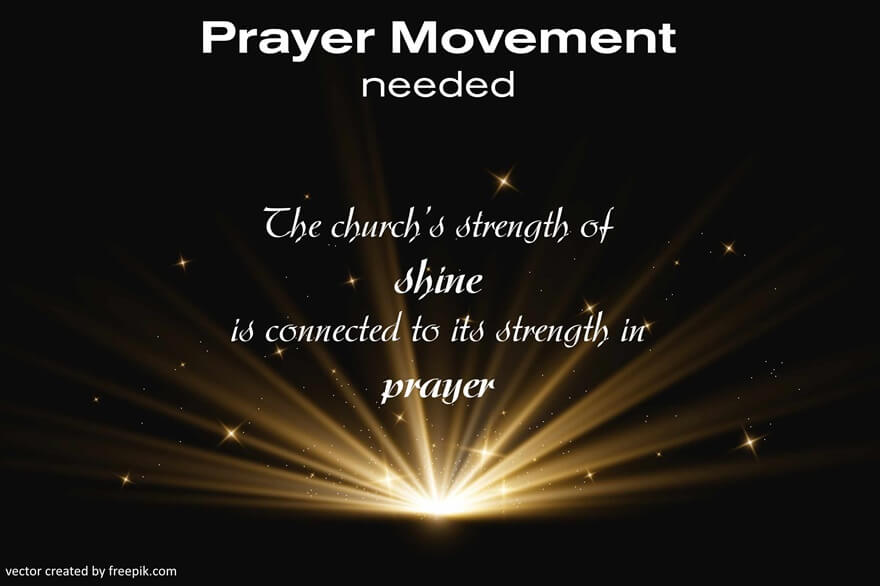 The nation’s small church is less than 1% of the population. But it’s the Lord’s lampstand and his chief agent for harvest, so it’s our most urgent prayer focus.

The church is a microcosm of Christ’s Kingdom. It shines the quality of life, the message and the works that the Lord desires for the nation. Its strength of shine is connected to its strength of prayer. As prayer strength increases, so does our level of agreement with the things in God’s heart for the nation. Our greatest impact on Thailand lies in praying for a prayer movement in the church.

A spirit of prayer

When the spirit of prayer spreads – when prayer invades living, defines meetings, becomes passion more than duty and increasingly draws people in – that is a God-movement of prayer. But God works to the sound of prayer. So we ask, Lord, give the church in Land of the Free a prayer movement.

Zechariah was a restoration prophet-priest. His name embodied his message: God remembers. He gave the people, restored from exile, prophetic snapshots of the future God promised. It included the wonderful news of the Messiah arriving as a purifying fountain (Zech 13:1). But, ahead of that snapshot, he gave this message from the Lord: And I will pour out on the house of David and the inhabitants of Jerusalem a spirit of grace and supplication (Zech 12:10).

The spirit of prayer comes from God, is the vanguard of his promised breakthrough, and comes with a grace that enables a ‘new norm’ of extraordinary praying. It’s not routine prayer, and not an anointing to boost the prayer lives for a few individuals. It’s a strong prayer appetite that spreads through entire communities, small or large (house of David and the inhabitants of Jerusalem).

As Christ’s holy priesthood, prayer is our core response to Glory. We honour his Glory by asking for a spirit of prayer in the church.

In the next post, I’ll share three important elements in asking for a prayer movement. But for today, let’s go back to the Zech 12:10 promise. Meditate on its significance in our New Covenant frame, and ask the Lord for such a prayer movement in Land of the Free.

Additional posts on praying for the Buddhist world: The Seeker and Awakened under a Fig Tree