Frame your Picture in Promise

History seemed to pause on the Kadesh threshold. Ever since God first announced it to Abraham, generations of his people had carried the hope of a promised land. Finally, Promise was about to birth. Twelve spies had returned from their Canaan reconnaissance, and the future of Israel would pivot on their report.

The story is well known.* The twelve spies were in agreement: it was a fertile land of abundance, but with fortified cities and powerful warrior-inhabitants. Compared to the giant of the land the Israelites seemed like grasshoppers. All twelve spies had exposure to the same Promise of God, and exactly the same survey picture. But the report ended with a ten against two split. Where they differed was not in the information they had, but in their interpretation of it. And their interpretation was shaped by the way they treated Promise.

The ten spies separated Promise and the picture. They looked for circumstances in the picture that could assure them Promise was likely to happen. When, instead, they saw overwhelming obstacles and resistance, they stamped impossible across the Promise. There was zero chance of a grasshopper army eating their way into walled cities and toppling giants. An invasion attempt would end in disastrous defeat. With that interpretation of the picture, they decided Promise was a failure and they would rather settle for a future that matched their past (a return to Egypt).

The two, on the other hand, chose to frame the picture in Promise. They carried Promise in their hearts, and whatever they saw they pasted into the frame of what God had covenanted to do. For them, the surprising abundance in the land, as well as the impossible obstacles, made the dimensions of the Promise frame even larger! 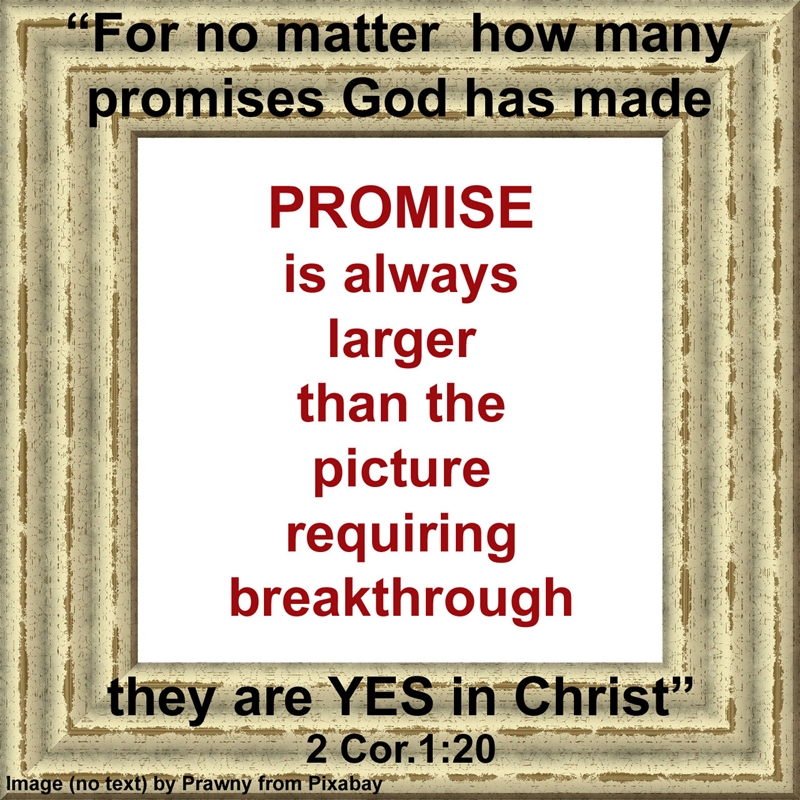 The ten let the realities of the picture overshadow Promise; the two insisted that Promise is much bigger than the picture.

The ten allowed the picture to create unfaith and unrest; the two interpreted it as an arena waiting for God to breakthrough against impossible odds…because he said he would!

The Promise had been a topic of conversation, the theme of songs and the longing of pray-ers for centuries. Now, it was about to come true! Only, it didn’t (not yet), because there were two clashing interpretations of the same picture on the table, and the majority chose the ‘convenient’ one. The result was a delay in hope, four decades in limbo, and death in the desert of those who voted against being the breakthrough generation.

Caleb and Joshua saw the picture differently. God praised them for it and singled out Caleb (because he represented the line of Messiah, Jesus who would appear in that land of Promise) as a man who “has a different spirit and follows me wholeheartedly…” (Num. 14:24)

The record offers us a lesson for breakthrough praying. Breakthroughs are needed at many levels. More prayer meetings with more pray-ers is not the entire answer. Shifts, pivots and breakthroughs in history happen when people pray with “a different spirit”.

Promise excites them; they love replaying the Speaker’s “I WILL”. They don’t ignore the realities of the picture they are praying into: the impossible obstacles, risks, puzzles and absence of answers to the how and when questions. But they refuse to give the picture a frame of its own; they insist on seeing it in the frame of Promise. For them, the picture’s impossibilities don’t threaten Promise; they enlarge its frame and energize prayer for its breakthrough. This isn’t ‘blind faith’ or soulish presumption, but a wholehearted AMEN to Promise that carries God’s YES in Christ (2 Cor. 1:20). So they don’t give up; they are tenacious and persistent, praying until Promise makes a difference to the picture.