Stirred up, but still resting

Bad happenings can jolt us out of rest. But good things, even prayer things, can also draw us from rest.

It’s possible to be stirred up in prayer, yet step out of rest. We want to pray with feeling, to be pray-ers who are stirred by what stirs God, but can we do that without stepping from rest? 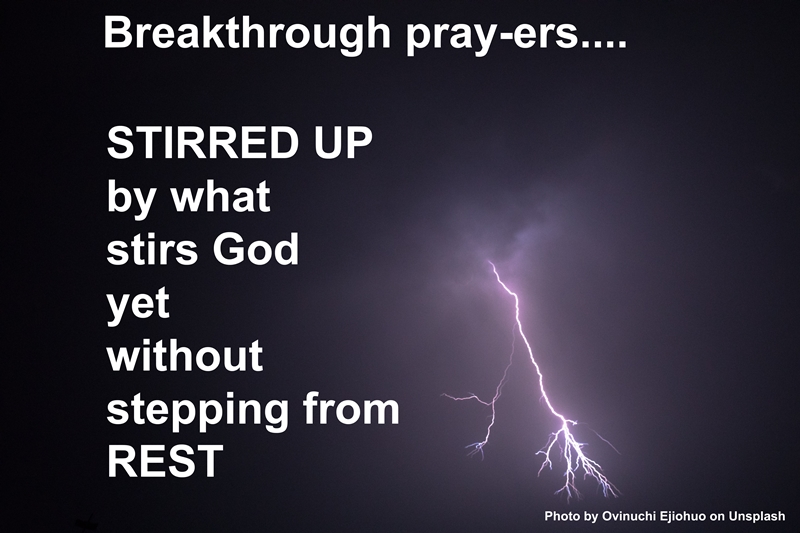 We tend to view spiritual warfare as the antithesis of rest. So we step away from the one in order to do the other. But they belong together. Whatever the level of warfare prayer, whether for personal breakthroughs or beyond, praying from rest is our strategic high ground and must be protected.

Praying for breakthrough is not a boosted intensity of soul-managed enthusiasm around an asking point. It’s a spirit-level connection with the zeal of God for his Glory and his resolve to triumph over Enemy obstruction. Connecting with Christ as Warrior should never disconnect us from his rest. His zeal and his rest are in perfect harmony, and his followers are reflectors of that beauty.

We can find ourselves micromanaging our prayer meetings from start to end, doing lots of asking, and then stepping back for the Lord to do his part: work out the answers. But he doesn’t want to be limited to the role of Answerer. He is the rightful Owner of every prayer session, and his Spirit is present to influence the direction, content and pace of our praying. He will, at times, lead us into intense, bold and passionate spiritual warfare prayer, but he will never lead us out of his rest.

Resting keeps our hearts sensitive to (and in sync with) God’s Spirit, so our breakthrough praying has the mark of agreement with him…especially in the constant, top goal: his Glory.

In my previous post I wrote that God has designed us to live best in rest, and it’s where we are the most effective as breakthrough pray-ers (see Resting has Authority). Psalm 144 gives us a glimpse of the how-to.

David understood the importance of replaying what the Lord says about himself. But in this prayer he doesn’t grab a random truth; he focuses on something relevant to what he is going through. He is facing enemy assault, so he focuses on God the Protector.

Rather than start by asking God for help, he admires him as Helper. He praises God for preparing him in advance for coming conflict: Praise be to the Lord my Rock, who trains my hands for war, my fingers for battle (1). Then he expands his admiration: he exalts God for being loving, his Safe Place (fortress, stronghold), Protector (shield), and Deliverer (2). By voicing agreement with the Lord, David silences fear and panic and stays at rest.

From rest, he prays as a man at war. He asks God to stretch out his hand against the enemy and show his power (3-8).  Then he celebrates rest again, devoting a new song to the Giver of victories, the Deliverer from enemies (9-10). Back into asking (11), and again to the restfulness of trust in God who keeps his promises (12-15). We have the picture of a man praying at war, yet staying in rest. That doesn’t ‘just happen’; the pray-er deliberately keeps coming back to an admiration of God. That way he isn’t drawn away from rest by the urgency of his crisis. As a pray-er he is stirred up, but still resting.

Once again (following from the previous post), return to your current breakthrough asking point: