The past two Pray in the Rain posts have been about ASKING, and the importance of advocating answers that agree with the Lord. This post fits the same prayer type, but is different from ‘ordinary’ asking.

How is intercession different?

As with all prayer, there’s an element of mystery to intercession. The word has taken on broad meaning, from a specialist prayer calling to just another name for prayer. Some see supplication as asking for our own needs, while intercession is about asking on behalf of others. The downside of using it broadly is we can miss its powerful main point.

It’s more than a focus-shift from self to others. And it isn’t an exclusive prayer level reserved for a select few who are called to it. Every carrier of Christ’s name holds an intercessor’s license. Whether or not it’s used is a choice of the heart.

The enthroned Jesus is an intercessory presence in heaven (Rom 8:34). His life is a constant incense on behalf of mankind, a fragrance of what he accomplished as Redeemer-Mediator: reconciliation (Heb 7:25). His intercession is an unbroken witness before the Throne that he has done everything necessary for the distant to be brought near and the disconnected to be restored to the full blessing of life with God. 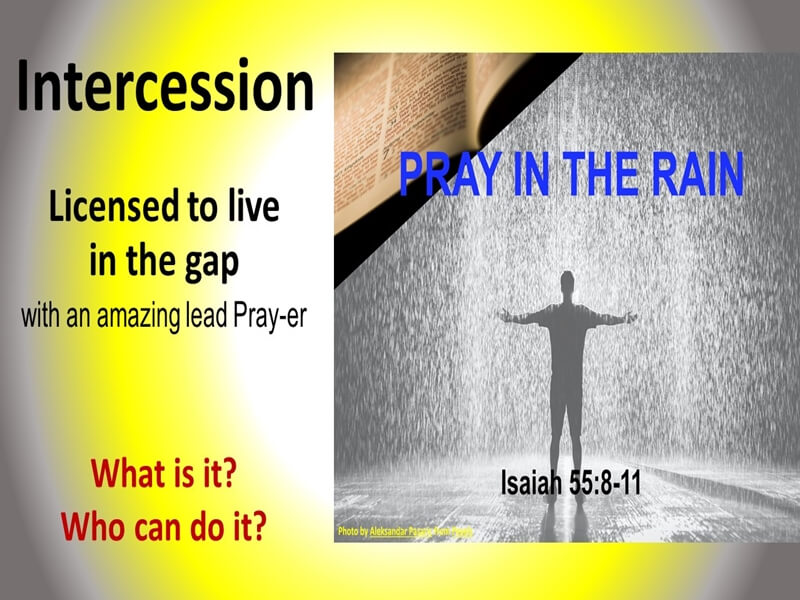 Our intercession is based on his. We are an earthly echo of Jesus the Intercessor. In his name we live in the gap between the Lord and needy humanity, praying the fullness of the reconciliation blessing won by him.

The gap-person’s heart connects to both the Lord and the needy party. The intercessor can’t prioritize the one without representing what’s best for the other.

The intercessor looks beyond the crisis, beyond the circumstances of the need, to the state of the relationship (or lack of -) between God and the needy party. Intercession appeals for the Lord to be the first Mover in bringing a change in the relationship.

The reconciliation blessing is at the heart of God’s purpose and is crucial to the life-quality he desires for men. It was won by the Redeemer, is mediated by the Intercessor, and he has licensed us to join him in the gap.

While Moses is on the mountain-top, the camp below are celebrating idolatry. The Lord is about to re-boot his nation-building plan with his friend, Moses as the new head. But, in the crisis, Moses recognizes a God-given gateway and steps through it into the intercessory gap:

The relationship between God and the people is fractured by their sin. Moses appeals for mercy; an undeserved reconciliation. In v11-13, he gives the Lord three reasons:  God’s desire for relationship with them, the honour of his name, and the promises he had made. The intercession is successful!