When change starts in the one asking

Jesus’ disciples were attracted to his prayer life, so they asked him to coach them. He started immediately, and in lesson one put the Kingdom at the top of the wants list (Luke 11:1).

Admiration prayers are a priority, but they must overflow into missional praying: asking for Christ’s Kingdom to impact the world. When it takes root in prayer it spreads into all of living.

The above is an echo from my last post: Pray-ers in training: to do it better & enjoy it more. It ended with: “praying for Kingdom increase will always bring increase in the life of the pray-er.”  I want to add something about the connection between the changes asked for and change in the one asking.

Let’s revisit an unforgettable day in Judah’s history. Solomon dedicated the Jerusalem temple, then God’s glory filled it. But the Lord knew that before long the crowd would drift from the excitement of the day into spiritual prostitution. Calamities would follow, and the people would call for God’s help. So, God gave Solomon a prayer-related nugget: when they pray, and CHANGE HAPPENS IN THE PRAY-ERS, then the healing they ask for will come to the nation (pray…. turn…then will I hear 2 Chron 7:14). It’s a simple truth loaded with significance.

Acts records another pivotal time for Israel and the world. Christ’s followers had been praying together for ten days. At Pentecost, the Spirit of promise was poured out, a city was impacted, and a global mission movement launched…..but not without CHANGE IN THE PRAY-ERS. The agreement encounter with God in the upper room reshaped the spiritual lives of the pray-ers. Change in the prayer room became the Spirit’s launch platform for Kingdom increase in the city and nations.

It wasn’t by chance. The upper room praying AND resulting change in the pray-ers were part of the outworking of the promise God had been announcing for centuries. 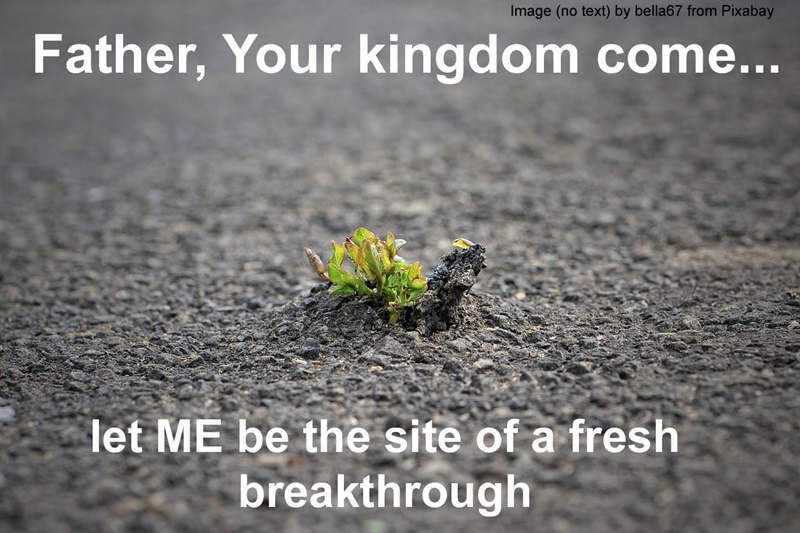 In our early years in Asia, we exhausted our evangelistic methods, but with little fruit. Desperate, we prayed for breakthrough. Then, during a team prayer gathering, the Lord spoke through a scripture: he promised a powerful breakthrough in the nation. Yes!! At last, breakthrough was on the way! Then the Lord added this: “Are you willing to let it start in YOU?” We didn’t get wildly excited about that bit. But we did say yes, and that green light took us into a season of humbling and painful heart-searching.

I recall calling out between sobs one morning: “Lord, please don’t stop!” The inner work of his Spirit was uncomfortable, inconvenient, invasive and embarrassing…. But it was too precious to stop.

We had prayed for breakthrough in the nation, and were being changed to reflect what we asked for. The Lord broke our hearts by drawing us deeper into his. The Spirit corrected, purified, tenderized us and soaked us in the wonder and love of Christ. He was making us a microcosm of the change we were asking for in the nation. And we were learning that change is asked for most passionately by those being changed.

Asking for Christ’s Kingdom draws us into fresh levels of his rule in our own lives. And this raises our platform of authority as pray-ers.

Praying Your kingdom come… can become a rote prayer, a lazy cliché. What specific manifestation of his rule are we actually asking for? What changes to lives, what light, what impact on a community?  It’s often in these same specific areas of our asking that he will change us. This truth nugget has a loud witness in prayer history: the change asked for often begins with a change in the one doing the asking.